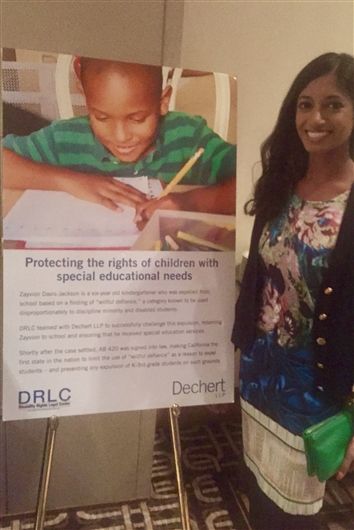 Amanda Gossai ’03 has practiced corporate law for almost a decade, primarily representing very large banks, hedge funds and real estate developers. However, in her self-written article, she explains how her most important client was a five-year-old African American kindergarten student who was expelled from school.

I’ve practiced corporate law for almost a decade now, primarily representing very large banks, hedge funds, and real estate developers. However, I can confidently say that my most important client has been a kindergarten student. I’ve been thinking a lot about him in light of the recent protests and Black Lives Matter movement that has surged in the past few months, especially in San Francisco where I live.

Before we get into that case, here is a bit of my background. After graduating from HTS in 2003, I pursued an undergraduate degree, law degree and finally a Masters at the University of California, Berkeley. After taking both the New York and California bar exams, I began my legal career at one of the largest international law firms in the world, Shearman & Sterling LLP in New York. During my time in New York, I primarily represented big banks and corporations. The days were long and gruelling, but learning from some of the most successful and well-respected attorneys in the field was rewarding.

A few of my mentors at Shearman & Sterling encouraged me to get involved in pro bono cases. Not only were these an excellent way for junior attorneys to draft briefs and argue motions, but they were also a firsthand way to help people less fortunate than ourselves who needed legal representation and could not otherwise afford it. One of my first pro bono experiences was a high-profile death penalty case involving many senior partners at my firm which was ultimately heard by the Supreme Court of the United States. This was my first real exposure to providing legal services in the form of social justice.

As the years passed, I continued taking on pro bono cases while working as a corporate and real estate lawyer at large law firms. I moved from New York to San Francisco in 2012 and soon found myself representing my youngest pro bono client yet.

My client, Zachary, was a five-year-old African American kindergarten student.  Long story short, Zachary had a lot of things working against him from the start. He was from a poor neighbourhood in California, didn’t have a relationship with his biological parents, and had been showing signs of ADHD and other learning disabilities.

Zachary went to school one day and had a really bad day. He talked back to his teacher, wouldn't listen and threw a tantrum. All sounding pretty normal for a kindergarten student, right?

The school expelled him.

They didn’t try to help him, didn’t even suspend him — expelled him. A five-year-old kid.

There are copious studies showing that African American children are disproportionately expelled and disciplined in school, while their non-Black counterparts get a slap on the wrist or a blind eye. Think about what that means for the rest of your life — how “your story” gets written by authors other than yourself — expelled from school at the age of five, labelled a troublemaker by the authorities, the little chance of success that you do have diminished from the very start. This is systemic racism.

I spent almost a year working with the managing partner at my law firm on Zachary’s case. We arranged for Zachary to get tested for learning disabilities, which he was in fact evidencing on the day that he was expelled. He was not a threat to his teachers or himself. He was expelled because he had no voice in a system that was built against him from the start.

We won the case. Zachary’s expulsion was wiped from his record. He was placed in a different program and had mentors and tutors helping him from that point on.

An added bonus, our efforts attracted a lot of attention. As a result of Zachary’s case, a new bill was passed in California. AB 420 prohibits California schools from expelling kindergarten students based on a standard of “willful defiance,” which has been proven time and time again to be disproportionately applied to African American children.

I am proud to say that this was the first law of its kind passed in the country.

And, I am disappointed to say that this was the first law of its kind passed in the country.

It’s important to acknowledge that racism isn’t just about overt racism. That’s pretty easy to spot and is socially and culturally denounced. There are also more subtle forms of discrimination such as systemic racism that prey on members of our society. As we enter this new era of change, I challenge you to think critically, have difficult conversations with family and friends, and use your privilege and power to effect change.

In recent months, I have marched across the Golden Gate Bridge with thousands of others in an effort to continue the fight for social justice. I have begun speaking to leadership at my company in the Bay Area about tangible ways that we can contribute to those who are underrepresented in our community. I’ve asked personal connections to introduce me to Colin Kaepernick’s attorney so that I could get involved in the Know Your Rights Camp, a social justice organization dedicated to educating young people of colour about their constitutional rights.

I sometimes feel like I’m not doing enough because my full-time job is still practicing corporate law, but I try to remind myself that every little bit counts. I think that if we all adopt this mentality, we will serve our communities well.

Lastly, Zachary’s case made me reflect on how lucky I am to have received a world-class education at HTS. I certainly didn’t realize it when I was a student, but being able to safely attend an educational institution like HTS is a privilege that many students in Canada and the United States don’t have. It took having a client like Zachary to appreciate the immense dedication and support that I was privileged to receive from HTS teachers, and I hope to continue to pass that on.
Back